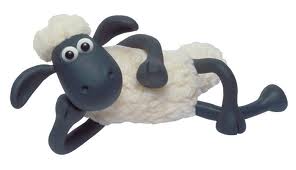 This week I have been looking for a partner in crime to do some sheep rustling. It’s all legit, of course!…

Mo bottle fed 2 lambs this year with the intention of eating them by Christmas but she got a bit attached to “Merlin and Ariel” (big “tut!” of disapproval by the Quilt Quine)

You can wipe your feet on them as you enter her house. One day last week she popped out but did not lock the door so they opened the door, shut it behind them and rampaged up and down the hall, eating lavender and whatever else they could find. They are not house trained either. So – it is time for them to go. The problem is that you can’t just give them to a proper sheep farmer as they have to be quarantined which proper farmers would find inconvenient for the sake of 2 waifs. Mo doesn’t actually want to know what happens to them so I either have to find them a home with a small-holder or get them to the place where they become ex-sheep. I’m still working on my cunning plan.

I have discovered that I no longer have to rant at the children to get ready in the morning. They have cut out the middle man and rant at each other instead. My husband had made a Lego Starfighter for Fergus and it took a fair while. Fergus was very pleased with it. Freya yelled at him to hurry up and get his shoes on, he said, “Shut up, Fatso!” – so she broke the Lego model. He had hysterics and she then got shouted at for causing the screaming. I spent half an hour figuring out how to repair the Starfighter knowing full well that it will be back in bits within about 30 seconds.

It has rained and rained this week. The yurt stovepipe has a serious leak. I’m getting soggy embers and the whole stove is dripping rainwater onto and through its hearth into my lovely Berber carpet. By Sunday the whole carpet was wringing wet so I have had to prop it up in the vain hope that it will dry out. I think we will take the carpet out to dry, try to fix the leak and just use the dhurries for now. The Thursday Evening quilters are due to have a Christmas “Do” in it on Thursday so I hope to have it all mopped up by then! Guess what I will get Mo to help me do on Wednesday this week?

Awesome/Awful has had a lot of work but not without its hiccups. I wanted melon shapes on it filled with feathers. I can’t get accurate marking done satisfactorily so the melons did not quite meet each other like they should. I have a plan… there will be a lot of hotfix crystals, buttons and yoyos to hide the inconsistencies. Perhaps I could now call it “Collateral Damage”. Actually, I think it will be called “Bewitched”. The rough blurb so far says,

“Once upon a time a wicked fairy cast a spell upon the quilting police… tensions were running high…good taste was abandoned and unruly feathers rambled all over the place…some quilters decided to have some fun…” or something like that!

This week I will try very hard to get all the filler and possibly the border done as there is a lot of embellishment to be added. I won’t be “allowed” much quilting time over Christmas so have to get on – apart from the school xmas party, the Carol service, the party for the teacher who is retiring, cards, wrapping, yurt mopping… no pressure!

All December blogs are accompanied by a nice glass of sherry… 😉

I had rather a successful shopping trip at the Fair-Trade Church inAberdeen. I bought a very nice djembe drum that obviously would not fit into a carrier bag. I saw nothing wrong with carrying it under my arm until I caught up with my 2 friends who were browsing in a rather cool shop called “Fat-Face”. They were slightly horror-struck that I would walk into a shop to meet them with a drum under my arm but then I threatened to start beating it so they decided to keep very quiet.

The sky was really leaden in town and by 3pm we had a heavy snowfall. I received an emergency call from the little girl next door. Her Mum and new baby brother had just arrived home from hospital and the car was stuck at the bottom of our track. I had a root around the garage, found some chain and backed the Landy down the track. Found the towing point on the neighbour’s car, attached it to the Landy and slowly pulled her car up to her house – very exciting. Perhaps I should get a winch!

School was not cancelled the next day as the roads were clear but the track was solid sheet ice for the rest of the week which got worse as all the snow melted from the fields onto it then it froze again overnight.

I went for a rake with Mo in the junk shop and we liked the look of a large, ornate mirror. She thought that it would look great above her fireplace. We did a bit of a Chuckle Brothers impression as we carried it to the car. Of course it was 2” too big and she refused to hang it on a different wall. So it was decided that we should lower the whole mantle-shelf. We discovered that it was only held up by one screw at each end anyway so that was easy. We also found that the slope on the shelf was not caused by bowed wood but by the fact that the joiner who put it up 10 years previously had not done a good job. We hacked a couple of bits of wood to act as chocks with a big saw on the kitchen table, nailed this onto the tongue and groove panelling then whacked the mantle-shelf back up with 6” nails – sorted! I did wonder at the comedy of it all that our strenuous hammering might knock the whole wall down but I think that if there was a freak earthquake that shelf would not budge. The mirror looks great and the ornaments no longer slide off.

On the quilting front I made good progress. I finished a Christmas wall hanging for my sister, 3 strings of Christmas bunting, the QBBI tartan holdall collection A3 piece, tried out a lace snowflake on the embroidery machine, loaded up the Awesome/Awful quilt, made a gift bag for the Aberdeen P&Q group Christmas party AND… (to the tune of “12 Days of Christmas”) …the most hideous banner made by a friend’s school Scripture Union group – bizarre felt faces glued onto a long piece of canvas with a hidden moral message. My heart wasn’t really in that project – it could have been a great kids’ project too but I got it all attached and bound so it looks more substantial, at least. I just hope they don’t put up a notice saying who quilted it!

I have had success with trying out some great metallic thread so I’m hoping to use it on the Awesome/Awful quilt. I have also ordered lots more gold stars and crystals so it should be nice and spangley.

I think I might have a sore throat but it may be due to yelling atWellingtonwho has decided to take a detour every morning when I’m in a hurry. Bloody Mabel was under control on a lead since they both went AWOL for hours last week (down rabbit holes) but she managed to pull me over into frosty mud – grr!

On Friday evening Mo and I were supposed to go to see Beth Nielsen, the country singer, but Mo forgot to get tickets. Instead we planned to go and see Brad & George in “Burn After Reading” but it wasn’t on so we had a pleasant time in her yurt watching “Thelma and Louise” (she has electricity), drinking wine and eating Doritos with salsa – which was just as much fun!

My Young Quilter seems to be lacking in commitment at the moment. She has been making a simple Christmas tree wall hanging but only came into the workshop under duress this weekend and dropped everything as soon as the girl from next door appeared. I have enough unfinished projects of my own on the go without anyone else in the family adding to the tally.

As well as actually managing to go into Aberdeenand do some Christmas shopping, I completed the construction of the Awesome/Awful Quilt. Most of the seams match up. There are 108 prairie points inside the quilt going onto a mad wide border. This was a bit of a breakthrough – I get to do prairie points without the fiddle of hand-sewing all down the back later. So far reactions have been mixed. It’s a love it or hate it quilt. It is so bright and clashy that even the gold lame has faded into insignificance. I’m trying to work out how to quilt it and choose the thread. As it is already so OTT, the finishing might as well have impact too. Plenty more sparkle to go I reckon! (It has to be finished by January 1st. – yikes)

Despite trying to stick to a packed pre-Christmas sewing schedule I have added in a wall hanging for my sister, Marjorie begged me to quilt a banner for her school, Bobbie Page brought me a very colourful king size quilt, Barbara asked me to embroider some numbers for children’s height charts and if I get hold of some sturdy soluble stabiliser I might try some lace Christmas decorations on the embroidery machine…

I should also mail out details of the next QGBI Area Day, complete the Aberdeen P&Q Group’s Christmas challenge, do some stuff for the Parent Council (I’m the Chairperson), organise Fergus’ birthday party and look like I have Christmas all planned. There is nothing like a little personal pressure. At least I have done quite a lot of Christmas shopping online – pity I can’t figure out how to get my Christmas cards done electronically too.