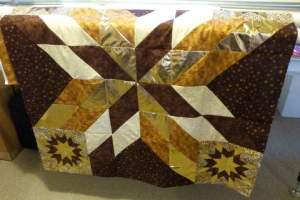 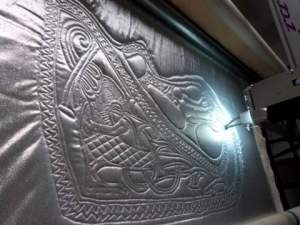 For some reason I have had the word “discombobulated”, meaning confused or muddled, stuck in my head and it seems an appropriate description of my week. I went to see the magnificently moving film, “Warhorse”, with its stark reminder of the tragedy of war which was what probably led to me having one of my “What is the meaning of Life?” moments.

I wondered whether to consider working towards a PhD. I even looked up the requirements on the Open University website where I was informed that a full time student would have to study for 16 hours per week. Surely I could fit that into my schedule? I could not actually understand any of the thesis titles so I decided that pursuing some kind of discourse on blogging and patchwork might be considered lightweight. Really, it would be better to be awarded an honorary professorship or just get on with the research required to finish off my Yurt book!

I attended an interview for a two day a week local teaching job and felt that I presented myself well so I was affronted to be informed that I had not been successful in securing the job. Apparently I had not given enough examples of the methods of formative assessment that I would use in the classroom. I sulked for a full two days as I was unable to accept that I might not have been the best candidate.

I eventually cheered myself up on one of my supply teaching days as I spontaneously planned 7 activities based on King Arthur and the Knights of the Round Table for a class of more than thirty 9-10 year olds whom I had never met before. I kept them entertained and under control and decided that was a pretty good outcome.

I felt obliged to prove to myself that I had worthy IT skills and determined to solve two tasks that have had me puzzled for ages. Inspired by the endeavours of a couple of tech-savvy fellow bloggers, Kay and Kathy, I finally figured out how to create a colour palette from a photo and I managed to “slurp” part of my blog so that it could be published as a hard copy.

I quilted and bound a vibrant maple leaf quilt for Shona in simple swirls, put the main part of Silent Movie Star 2 together then gave myself permission to start another metallic wholecloth quilt. The Norse helmet carving started off well but the slippery silver tissue lame had been very difficult to mark clearly and the lights from the quilting machine caused such a glare that I felt like I had snow blindness. I reluctantly decided that there were too many wobbly areas and the tension was not at all good so it would actually be quicker to start again with a new piece of lame than fix the issues. I have drawn up the copper carving now but this time I have marked the design onto the cotton back of the quilt instead of wrestling with the lurex that I will be using. Thus, the back of quilt will be what I can see and the temperamental fabric will be underneath. I think it will be challenging…