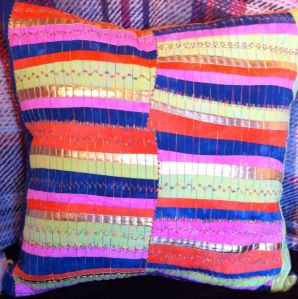 I think I may have said, “Never, ever…” a few times this week. I left Fergus in charge of a slow baked rice pudding but he forgot to tell my husband that it was in the oven and 4 hours later it was welded to the dish and had dried to a brown paste. I made again the next day, leaving one of the girls in charge which was far more successful.

My other cooking foray this week was trying to replicate a 1950’s style sweetcorn-relish. The recipe I found tasted pretty good after I added some chillies but the liquid was too runny whereas I wanted something more jammy. Everyone complained that the house smelled of boiling vinegar so I wondered if there is a way of making a corn relish conserve and adding the vinegar later. Perhaps I should have trained to be a Home Economics teacher. I am thinking adding some arrowroot to stop this batch of sweetcorn-relish falling off my sandwiches. Maybe if it was a stiffer mix I could stuff it into home-made ravioli?

One of my friends has suggested that I keep deviating into culinary experiments to avoid doing the work that I am really meant to be doing. However, I spent almost the entire week working on a double-wedding-ring quilt and swore that I would never, ever do one again with such a tiny background fill. After stitching traditional pumpkin seeds around all of the rings then surrounding them all with stitch-in-the-ditch quilting, I stood and quilted tiny plumes and swirls for 25 hours! I know this is what the customer really wanted but it was rather frustrating that it took so long when I have 4 other customer quilts and a myriad of other projects that need to be done within the next month. I didn’t even waste time day-dreaming about my linen project even though some vintage strawberry printed fabric arrived in the post from Singapore;)

I took an afternoon off to make up a Northern Lights cushion so I could check the quantities and take step-by-step photos for The Book. I felt that it was done in rather a hurry but I am pretty pleased with the finished project. It will not be a class for slackers as I was hard pushed to complete the project by teatime.

I hand-sewed a few beads onto the leather skins in my “spare” time but realised that I still did not have enough so I ordered even more from Ebay. It has been suggested by another of my friends that I use the random left-over beads to fill up one of my fancy empty gin bottles…