Radio 4 got me through the boredom of completing the unpicking and de-fluffing of the “Quilt that nearly stole Christmas”. There were still a good two days worth of quilting to complete and because I had been cursing it for so long I wondered if its maker would even be pleased in the end. There were hundreds of thread ends to tidy up and it had to be bound on both sides so I became irritated by all of the cheery enquiries as to whether I was “all organised for Christmas yet?”

I wrote my Christmas cards very scruffily on the last second-class posting day and hurriedly sellotaped the parcels to Norfolk to get them sent away. I did not write an impressive end of the year family newsletter with colour photos and I did not create a hand-made holly wreath for my front door. The postie and various couriers delivered everything that I had ordered online and I wrapped all of the kids’ parcels in a slapdash style without bows or labels, simply using colour-coded paper for each recipient. Maybe a touch more sherry will give me some much needed Christmas spirit…

I decided to make a couple of last-minute gifts for friends so I have run up two cushions and quilted some fabric for notebooks – all I have to do is get them finished off on time! 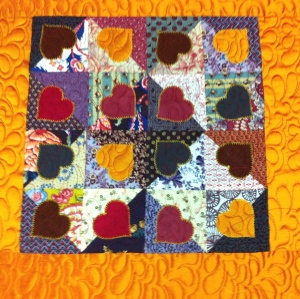 The most exciting event of the week was Freya’s much anticipated Senior Prom. Thankfully, Mo and her daughter took charge of the glamorising and Freya looked fabulous. She was astounded at all of the compliments that she received. Nobody could believe that her dress was home-made and they thought her gold Doc Martens were awesome. The boys all scrubbed up beautifully in their kilts. Parents watched as young ladies in fancy frocks and incredible shoes tottered their way to the buses that would ferry the kids to a posh hotel for Christmas dinner and ceilidh dancing. Most of them commented nostalgically that they had only gone to crummy school discos at that age where the only catering was a can of coke and a bag of crisps;)

I attended my 11th nativity service as a parent and was very proud as Fenella played violin in her last Christmas concert at primary school. I still need to run a few errands before Christmas arrives, sourcing a large roll of corrugated cardboard and brussel sprouts. There will also be some cooking to do, mince pies to eat and a festive catch up with my two best-friends. By the end of next week I will be dying to reorganise my workshop and itching to start some new projects!