It was an absolute boon to have Freya at home at a bit of a loose end for her Spring Break from Uni. Most of her friends were either away travelling or had different holidays. It was so helpful to be able to text her with instructions to switch the oven on or rustle up a batch of chocolate brownies. She even did the catering for a class of ladies who were here for a day of improv curved piecing.

I enjoyed her company for dog-walks and morning coffee, and she proved to be a very good chicken whisperer. Within 24 hours of asking if anyone had hens for sale on Facebook, we had 4 new layers, 2 of whom immediately tested the defences and worked out that they could easily escape using a vertical take-off method. We rounded them up and gave their wing feathers a trim, returning them to the chicken run so we don’t lose their eggs in hidden nests amongst the nettles.

I marked a piece of Bosal interfacing with a Frixion pen and quilted circles onto a piece of fuchsia fake leather. I used a small curved ruler to quilt inside the circles then “organically” freehanded the background. It is far too long since I did this type of quilting just for fun and I really enjoyed it, despite having to slow down after bending a needle that was too fine for the job. I should have used leather needles but I did not have any left so I used a metallic needle instead. It was tricky when using the acrylic ruler base because it kept sticking to the fake leather underneath – next time I will just use the Frixion pen on the “pleather” side, not the reverse. This piece will have some accent embroidery stitching around the circles then will be made into a simple leather tote. It is a sample for one of the classes that I will be teaching in Germany in a couple of weeks.

The other project will be a sampler quilt of machine quilting. I have decided to quilt the background first on this occasion then add fancy circles afterwards. I don’t know how I came to order cotton sateen fabric with added spandex but I managed not to get any weird puckers in the automated curved line quilting. 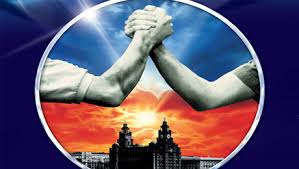 I had a very cultured weekend starting with taking Nella to “Blood Brothers” at His Majesty’s Theatre in Aberdeen. The show was fantastic with amazing performances, clever scenery and it ended with a much deserved standing ovation. Freya and I went to see Nell in her choir concert on Saturday morning then we went off to see the new Disney version of “Beauty and the Beast”, starring Emma Watson at the cinema. We enjoyed it as a spectacle far more than “La La Land” and now want to dress like French peasant girls in long pantaloons, Provencal layered skirts and espadrilles;) 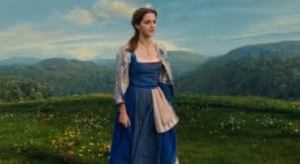