Pretty much all I have done this week is quilt with pink thread so it is a good job it is variegated, just for the occasional surprise. After a 10 second discussion with myself, I decided to quilt tiny spirals in the half inch piano keys because I knew I could not bear to leave them naked. Then I started on the marathon task of stitching small spirals and swirls in the background which was back-breaking because I like to have my nose as far over the quilt as I as I can and I don’t have a hydraulic lift on the Q24 table. Frankly, it was quite boring at times and progress seemed to be slow because it is a pretty large quilt at 94” square. Even Bumble, thought it was tedious went outside to watch the grass grow.

To alleviate the tedium, I did laundry and opened one of the bottles of Furze Fizz which was so lively that the spring top did a fair imitation of a champagne cork at the Grand Prix. Despite losing a lot of effervescence before getting any actual fizz into a glass, I was able to do a tasting and decided that it was delicious and would probably go rather well with gin.

We had a 3-day heatwave with temperatures up into the mid-twenties celsius. If anyone ever leaves me a holiday house in the tropics in their will, I will sell it and buy a hunting lodge in Finland. The heat makes me grumpy and gives me a headache and when it is so hot that I have to have my workshop door open, I should just give up and find somewhere to hang a hammock.

Fergus reconfigured or messed up the internet this week, attempting to speed up our broadband, despite being advised not to touch it… it is now worse than before and I discovered a stash of unsent emails several days later, some of which were thread orders. I am now panicking that I will not be able to get enough wool thread to start requilting and embroidering the large motifs on BzB later in the week. I may even challenge Aurifil and Madeira to see who can get thread to me faster and I will use whichever one gets here first. I have made a back-up plan in case the thread does not arrive. I have yet to complete the background quilting, prepare the binding, make a label, a double-sided sleeve and consider adding colour using watercolour pencils or paints because the quilt has to be FINISHED before the school hols start at the end of June! 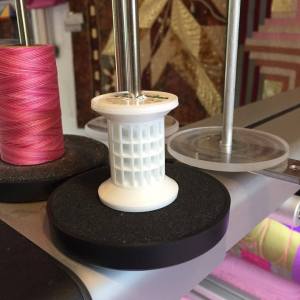