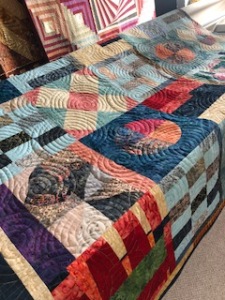 Without a doubt – staying at home, not seeing anyone, sticking to a plan, really gets things done! I got 2 customer quilts and a cushion done before using the sometimes co-operative ScanCut machine to cut out shapes for my German class samples. The floor in my workshop was soon covered in bits of bondaweb, organza scraps and bits of wool. 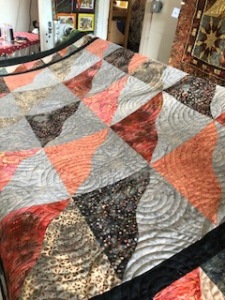 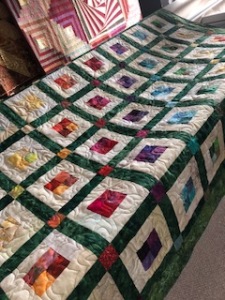 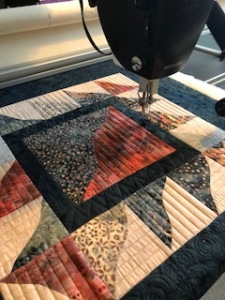 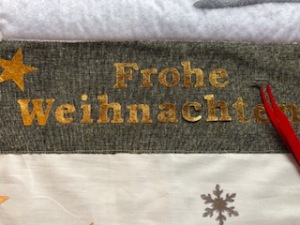 Metallic lamé on bondaweb is not an easy thing to cut as it does not seem to stick properly in small spots so some of the lettering got mashed up. Eventually, I cut out larger, separate letters but managed to mis-spell Frohe Weihnachten several times even though I had it written out correctly. I peeled the wrong ones off with tweezers and had to glue them back down.

I have two small, German Christmas projects ready to quilt – one of strings of kugels with fairy lights and a snow globe of Coburg Castle. Hopefully, I will get them both done during the week as long as I don’t get too sidetracked.

A side project that I had going was to make a dozen tweed pouches to give to fellow travellers on an upcoming trip. I made them up in kit form so I could do all the zips at once. Each one was finished with a pompom but I cannot guarantee how robust they might be after a few zip pulls. 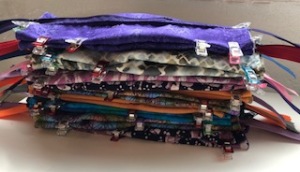 Out of curiosity I made a properly squared off box pouch which did look nice but I was not keen on the exposed seams (not wanting to deal with the lining and outer part separately). I downloaded a LazyGirl pattern for a Bendy Bag and spent several hours following the instructions religiously, apart from using the recommended materials. I wanted mine to be made with quilted fabric but it really was too thick for finishing the exposed seams neatly – the overlocker was not up for the job. I want to modify how the zip finishes so obviously I felt the need to make a new prototype from double thickness tartan that does not involve a lining and a different way of attaching the zip. This is still a Work in Progress… 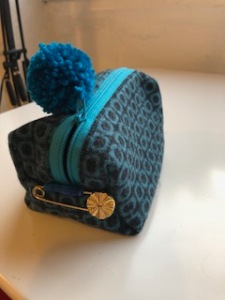 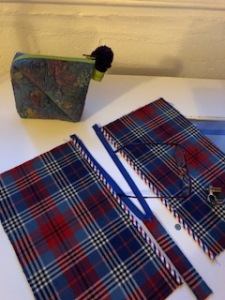 Apart from all of this impressive productivity, I also managed to hem a pair of jeans, complete a pointless online training course to remain eligible for supply teaching, make a key fob, and visit the Masters Degree show at Gray’s School of Art which showcased work that was refreshing, impressive and even bizarre. I am looking forward to starting my evening class on textile printing in October to add yet more ideas to my list of experimental  projects. If only I was as enthusiastic about paperwork;)