I spent Monday morning shinning up and down a step ladder to tie lengths of string to my workshop strip lights so I could hang up a set of fairy lights to make the far room with fewer windows look more inviting. I had not noticed that the lights comprised multiple dangly strings of icicles or that they might flash. A certain amount of detangling went on and I managed to disable the annoying twinkling. After that was all sorted out I plugged in the new Q24 and gave it a quick test run and all seemed well, which was a relief since I built it by myself!

While I had a DIY quilter here a friend came over having suggested that my bookcase was inaccessible behind the ironing board. She gamely took all of the books off the shelf and we swapped the bookcase with an old kitchen dresser that stores stuff I rarely need (should chuck out). The books are now in the longarm room with non-flashing fairy lights and chairs that have been dug out and dusted off. I found a ricketty stool and mended it with a piece of wooden pallet, a couple of brass screws and a hammer, since I could not get the screws in far enough. I am going to invest in some ratcheting screwdrivers because my electric one is pathetic. I have no idea when I will sit calmly and read all of my books with a cup of coffee balanced on the now-steady stool but it all looks fantastic.

I received a package from India containing wooden stamps that I felt would come in handy. I gave them a quick print on a scrap of linen and they worked well. I planned to use them on the Warli quilt to fill in the blanks where I have to add strips to make the blocks fit together. 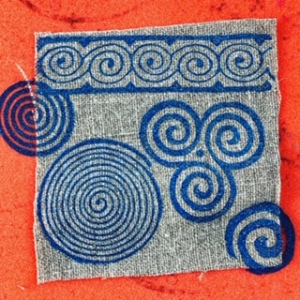 A customer phoned in a panic because a quilt that she had pieced seemed to have got pressed out of shape. She had been aware that it had a lot of bias pieces which just stretched and distorted when ironed. I used steam and spray starch to get most of that under control then quilted it with the Timewarp pattern. Thankfully no pleats or tucks were necessary and it all finished up nice and flat. It might not hang straight on a wall but it will look lovely on a bed which is what it is for;) 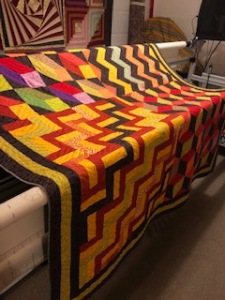 At the screen printing class I printed off 8 large Warli spirals on a very thin piece of white Indian cotton. I decided not to bother measuring the spacing accurately and will fill in some of the gaps with a few more people and small spirals. I intend to wear it to the end of year student exhibition. I printed off a couple of discharge prints on black fabric then declared that I had enough samples to make the quilt. 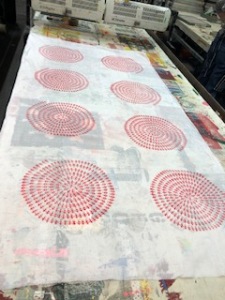 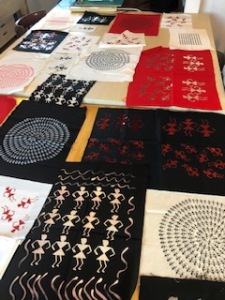 Piecing the Warli quilt was not very creative or scientific – I just joined strips on by eye until it all fitted together which took almost 2 days. Rather than print more blocks and take even longer to piece a reversible quilt back, I used Indian dye powder to dye a white piece of cotton as red as I could in the washing machine. I had to get my mop out when red dye started flowing over the rim of the defective workshop loo but the floor is concrete so no harm was done. The quilt back is a great colour but more under-ripe tomato red rather than ketchup red but I don’t mind because there are variations of red in the screen prints. 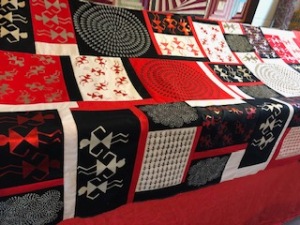 I decided to use the Qmatic to do basic background quilting in spirals then think about how to add interesting embellishments or additional stitching later. I was so pleased with the result that I forgot that I had intended to outline some of the figures. I carried on and attached the binding, complete with a fancy spiral stitch. I might pin the quilt back on later if I feel like attempting some freehand outlined Warlis in sparkly thread.  I hope to do some rustic kantha stitching in some of the blocks, add some block printing and sew on a few random pompoms so although it is technically finished it is not actually finished… 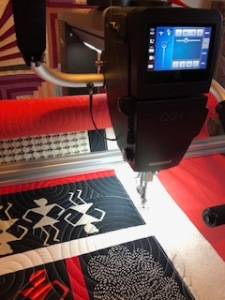 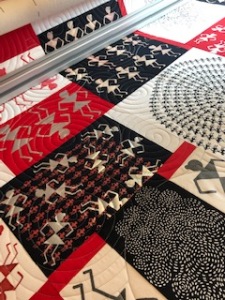