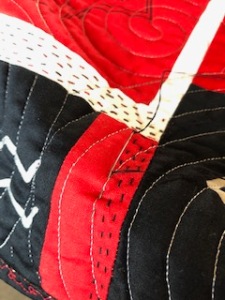 The warli quilt was not destined to become a show quilt but a few folk have asked if I intend for it to go to FOQ. I had planned to be working on something else for 2019 shows by now so maybe the warli quilt will be a contender after all. It is not that I have not made an effort with it, just that it was not exactly planned. It was only really originally made for the evening class exhibition.

I did go around some of the figures with sparkly thread but not all of them as that would have been bonkers. It was tricky task since they are very angular so any freehand wobbles would be obvious and they are rather small for rulers. I wound quite a few pom-poms before deciding that I had been making the wrong size and maybe they were not strictly necessary. 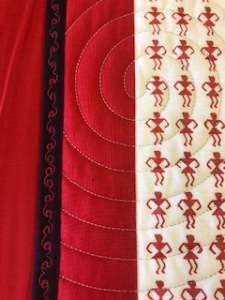 The thing that did get out of control was my decision to kantha stitch all of the unprinted sashings. I dislike thimbles, the eco wadding was a bit tough and the big needles required for thicker threads did not exactly go through the layers of the quilt willingly. Sometimes I found the task calming but at other times I was frustrated by tangling threads and before long I had bent several needles and worn away the top of my finger. My stitching looks decidedly rustic but it does add really nice texture. After some long hours of hand-sewing I can’t believe how many sashing strips there still are to finish!

Although it felt like most of my week was absorbed by the warli quilt I managed to fit in a customer quilt and I dyed some cotton pom-pom trim to attach to my as yet unfinished scarf.

On Thursday I presented a trunk show and (ha-ha) hand-sewing workshop to a visiting group of American visitors in an Aberdeen hotel. Despite being near the end of their busy tour, they were an enthusiastic and appreciative group and everyone did a great job of simple stitching on a triskele “mug-rug”. Aberdeen’s mini IKEA is situated in the area where I was teaching so I nipped in for a wander and came out with 2 cheap red cushion covers, ideal for screen-printing. 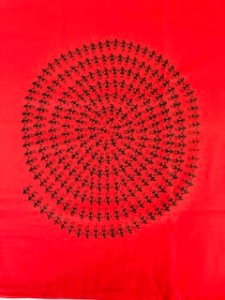 On Saturday morning I drove into Aberdeen to visit Peacock Visual Arts Studio where I had signed up for a class in using a Risograph copier. I was not sure how this could be applied to fabric printing but I used it as an opportunity to see what else went on. I was excited to discover that there is also a laser cutter and a suite of Mac computers running Adobe Illustrator and that the learning sessions are very reasonably priced. I am hoping to get some tuition in creating vector drawings that can be converted into stitch files on the Bernina Qmatic.

During the workshop I added text to my warli spiral since I thought that a chorus from Blur’s Parklife seemed appropriate,“All the people, so many people, and they all go hand in hand…” I have no idea what I will do with my batch of warli posters yet but it gives me something else to exhibit at the art school show I a couple of weeks:)