I made great progress on some customer quilts this week and have them all trimmed, ready for collection. I have had an enquiry about custom quilting a great quilt – I would love to do it but I know that it would take me well over 10 hours which puts it well above the customer’s budget. It will look perfectly nice with a suitable all-over pattern so I guess it comes down to whether it is to be used as an every day bed quilt or a pride-of-place wall hanging.

I have finally sewn on all of the tiny bells onto the Rainbow Warliors quilt! I applied all 600 more hot-fix crystals into the tiny squares but I was about 25 short so had to order yet more. That will make almost 1000 little sparkles. I also managed to attach a few mini hot-fix mirrors onto some 2” squares using an appliqué iron on a low heat setting. I have the label to do, threads to tidy, later on it will be blocked but for now it has been shelved until I get around to hanging it up for a photo.

During the week ECT Travel published a Zoom interview that Kristell did with memory Instagram. It came across better than I expected despite my dodgy lighting and scruffy, long hair. I have decided to sign up for some online classes and typically, instead of just seeing how it goes it has got me into researching equipment that might be useful for streaming future lessons. I have been watching YouTube demos on how piano teachers set up overhead cameras. I drove Freya mad asking her to practise Zoom with me. I wanted to sign in on a laptop and a phone to see how using different cameras might work but I got weird echoes, even when the device was meant to be muted. Apparently, using headphones might help.

I am quite “Techie” up to a point but wish I really knew what I was doing. I dropped my laptop off to be looked at and was told the hard-drive is dead.  I have decided to get it fixed and use it if I venture into filming and recording. Otherwise, I have found that I can get by using my IPad and the old, family IMac. 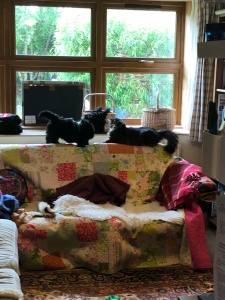 I expect that when Freya comes home with her first car-load of stuff from her student flat she will think Nessie looks bigger. Nessie thinks she is pals with Thistle, who is amazingly tolerant but her idea of playing nicely is not really cat-friendly. She is now developing the Scottie characteristic of ignoring me calling her if she is having fun cat chasing. I need to work on that… maybe I can make some jerky using the food dehydrator that I have ordered. Nella and I thought that if Freya ever manages to grow excess cherry tomatoes in her long-awaited poly tunnel we can preserve them. Perhaps it will be a novelty item but if it can dry soft fruit that is in season locally now for winter then I think it is worth trying.