For some time on my blog there has been the theme of feeling of guilt at not being busy or creative enough. I keep telling myself that I will move forward when the summer is “officially” over. Well, schools in Scotland have gone back after a much longer than usual break. The nights are drawing in, the rowan berries are on the trees and there is a nip in the air but as far as I am concerned, it is still officially summer! I managed to quash most of my guilt and spend most of the week just pottering, getting some useful things done on the way.

I had to quilt the Postcard from Sweden quilt over 2 days because the pattern was intense but I saved the project and opened it up without any bother on day 2. I love the “Folk Flowers” pattern by Sunstone Quilting and I think it looks fab on the rainbow triangles. I made a scrappy binding and sewed the topside down by machine with a blanket stitch. The quilt has gone on my bed, even though it does not co-ordinate at all with anything else in the room. I don’t care – it is joyful:)

Having used a decorative stitch on my binding, I decided to use an obvious zigzag stitch on two customer bindings. It is actually much easier than keeping a straight line dead straight, especially if a customer happens to have provided one that varies in width throughout.

Nessie was given a clean bill of health at her post-op checkup and is totally back to her usual naughty self:)

I made two macrame projects using green cord which was thinner than I had expected. It is a nice colour but not as chunky as I would have liked. That is the trouble with placing an online order. I have now cut a lot of pink cord for a bag but I can’t seem to understand step 1! 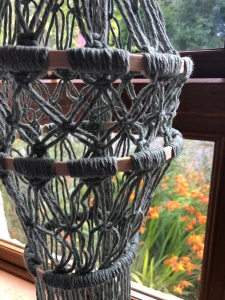 Over the course of the last week or so I have posted 10 days of quilt photos on social media. This was a really good exercise in reminding myself about how many interesting things I have made over the years. I was really hunting around for photos because my laptop had crashed and seemingly lost everything. I decided to try once more to see if anything useful had been stored on my external hard drive. After some serious rummaging, I was delighted to find files that were hiding deep inside other files and I now have all of my old stuff back, including my kids’ photos! Just that should go down as a major achievement of the week.

My next mission is to make decent lasagne pasta using the KitchenAid. I have rolled out extremely rustic flat bits of dough that look nothing like the ones in the instruction book. I think mine may be a bit chewy.

I still have not come up with a next major project but my kids suggested that I do a YouTube studio tour so maybe I will look into that. In the meantime, I have ordered some unicorn and hedgehog stretch jersey for PJ’s so that should keep me busy for now…