Another week has gone by and I wonder what I did to faff my way through it! There was one big, colourful customer quilt. I tried to quilt rainbows onto it but the pattern kept crashing the system so I used a substitute pattern called “Dizzy Izzy”.

Nessie tried out her new, fleece rain suit. She was not altogether pleased at putting it on and taking it off but once it was on she did not mind at all and it kept her clean on a muddy walk.

Freya and I both made new sourdough starters for bread making.  I was excited when my KitchenAid pasta press finally arrived after months of back order and I made some vegan macaroni, substituting egg for a paste of ground flaxseed. This dried successfully in the dehydrator which is more than I can say for my semi-dried tomatoes and blueberries which obviously should have been vacuum packed since both went horribly mouldy in their soft state. 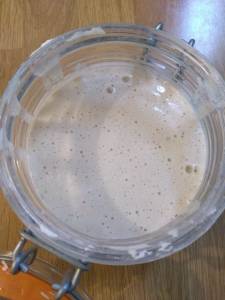 I made 2 wearable pyjama tops using the simple and voluminous Athina pattern. My overlocker decided that it did not want to sew properly so I spent most of a day servicing it, panicking that it might have to be sent away for weeks

or be replaced. I tipped it upside down to clear out fluff, changed needles and the blade, before finally realising that

a tiny spring had jumped out of place. That was enormously satisfying. My next challenge was remembering how to thread the cover-lock machine to finish the hems. It is not actually complicated, just fiddly and would not have taken so long if I had consulted the instruction manual sooner rather than later.

After months of procrastinating, I got Freya to film an off-the-cuff workshop/studio tour that I have uploaded to YouTube. It was really just to check that I could make a half decent video and see if it would spur me on to having a go at some instructional videos. I had forgotten how much I enjoy making informal, short clips so despite the dark clouds of Covid and Nella’s illness, I hope to go ahead and make some more. It is quite surprising what people watch on YouTube – this week (for research) we have watched videos on garden tours, grinding flour at home, macrame bags, spice jar organisation and even stationery shopping.

There has been a nip of autumn in the air so I guess summer is “officially” over. I need to do what I have not done in months and make some To-Do lists. Apart from getting brave enough to make more videos I need a proper project of some sort as I have not quilted in earnest for ages.