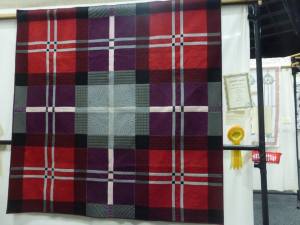 After yet another hectic week working on customer quilts and being at school it was great to stay with Ellen overnight then meet Kay for brunch in IKEA near Edinburgh before visiting the Scottish Quilt Championships. Kay had several customer quilts in the show as well as a super new kaleidoscope quilt, “Brewster’s Reflections”. For some daft reason my camera battery was dead so I have posted Facebook photos of the quilts but I’m sure Kay will have some good ones on her blog www.borderlinequilter.blogspot 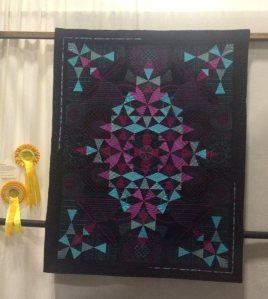 Tartan Tattoo came 2nd in large wall quilts and was awarded a judge’s choice certificate by Susan Briscoe! It seemed to be a popular quilt with the visitors which is hardy surprising at a Scottish show;) 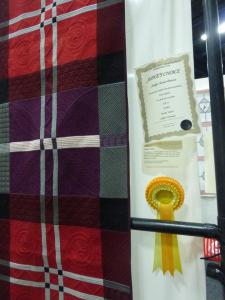 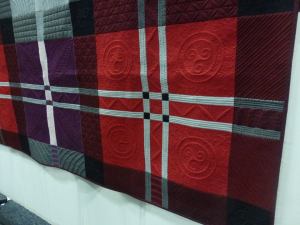 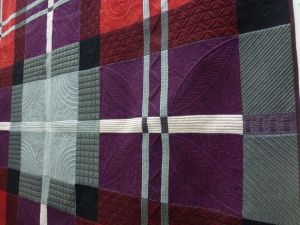 I finally found a day in which to iron Vilene onto my piece of linen and the woad dyed shawl. Drawing out the shield maiden motif onto freezer paper and cutting it out neatly was tricky but it is now ready to attempt the reverse appliqué which I hope to do in a few spare hours before my first classroom observation in 20+ years. I am telling myself not to get in a pickle over the latest teacherish jargon and just carry on regardless. If it all goes pear-shaped I will just have to carve out a career as a quilt artist:P 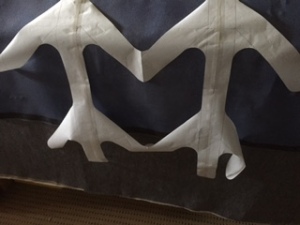 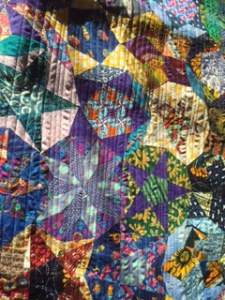 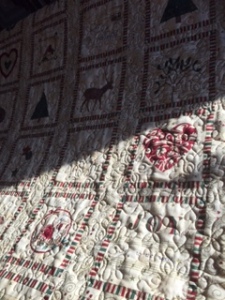 customer quilts by Valerie and Annie 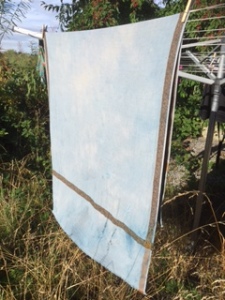 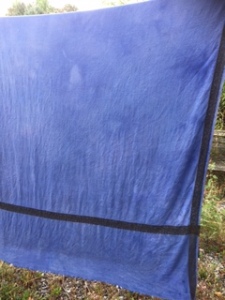 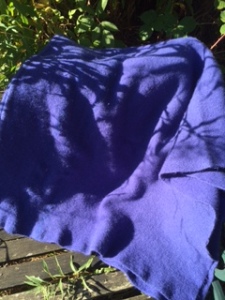 I am finding teaching part-time in school regularly for 2 days a week challenging. I am now beholden to write lengthy plans and learn the latest, pointless jargon, both of which sap my time and enthusiasm. I guess I just not quite plucked up the courage to declare myself a bona-fide textile artist who can actually earn a living. Currently in my over-crowded week, I can have 2-3 days of DIY quilters, 2 days in school, some customer quilts and very little time to experiment. 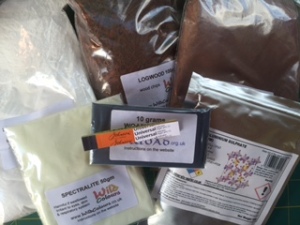 However, I was determined to dye the wool for “Shield Maiden” this weekend. I had a buff coloured Indian wool shawl and a couple of old wool blankets. Dyeing with woad was fascinating but long-winded. The process is similar to dealing with indigo dye but was further complicated with preparing the wool for dyeing. It took a whole day of dipping and exposing the woad dye to the air to get a deep enough hue. I wish my Chemistry A Level had been half as exciting as the mixing and measuring I had to do with all of my powders and potions. I even had to test the pH of my solution with litmus paper! The wool blanket was just wishy-washy in the woad dye bath so I decided to run it through the machine with Hungarian dyes. Even though it had been mordanted, the colour all washed away until I remembered that I had some acid dye for wool stashed away and finally achieved the royal blue that I had been looking for. I am not sure whether the now felted blue wool is too thick so I also have the fine wool shawl as an alternative. 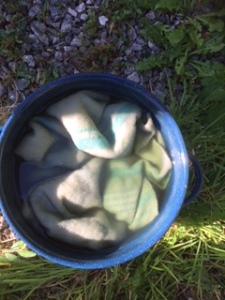 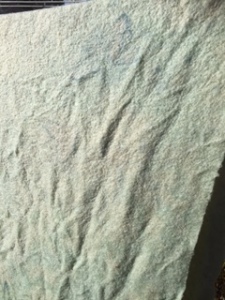 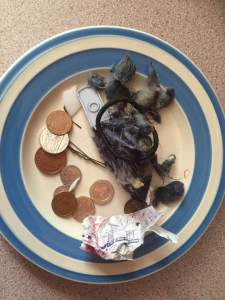 Mind you, what was meant to be a fun afternoon became very stressful as the washing machine broke down before I had done any of the weekend’s laundry. It had to be taken apart to cough up some trash (ahem – wool gunge amongst other random objects) that had  clogged up the pump. While dealing with a non-draining machine, dip-dyeing with woad and doing a customer quilt, Fergus got me to act as his roadie to change the strings on his guitar after he had taken off the old set and forgotten how to wind on the new ones – in about 10 minutes before he was due to debut with his school’s Soul Band! 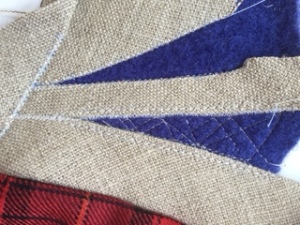 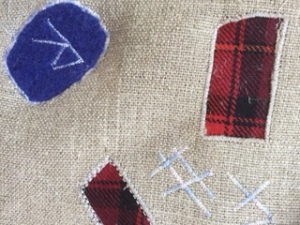 I have tried to make samples to decide which method of appliqué to use on “Shield Maiden”. I like the edges folded under but can’t get super-sharp points with the coarse linen so I may have to add curves to my original design so the linen can bend where it has to change direction. I have already ruled out piecing as the materials are too thick. I had a go at rune-like designs using satin-stitch but it is not “right” so I will have another think about that element. 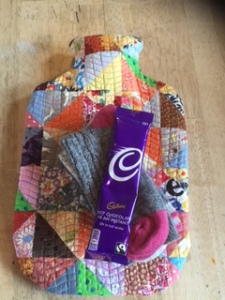 I made a prototype hot water bottle cover to work out whether to add binding on the outside or not and learned that my overlocker could not deal with the tight curves of the hottie’s shoulders. Freya was delighted to receive a “hottie” to match her quilt in a parcel from home. I expect she will tell me to stop sending her stuff after a while. This week I had a go at making a prototype pair of PJ shorts which may get posted off to Uni. Funny how quite a few projects don’t ever make it past the prototype phase;)

I have been frustrated that I have not yet started on Shield Maiden but at least now I have all of the materials ready. There is an inviting piece of natural linen, a wool shawl, woad powder, alum all waiting patiently on my worktable. I am still tempted to ferment a bucket of urine for two weeks to dye the wool “authentically”. 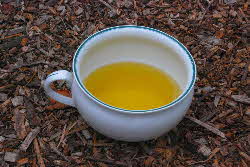 I have been kept busy with my 2 days per week at school but more annoying and time sappingly, doing paperwork for school.  At least I unwound for a while by returning to a long abandoned “in the background” quilt… 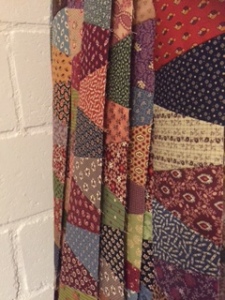 A customer was here DIY quilting two of four large Harris Tweed quilts which will look fantastic in her Highland holiday cottage and most certainly keep the draughts out in winter.

As the weather gradually turns more autumnal I decided to make Freya a hot water bottle cover using the scraps from her “Goosey Guddle” quilt. I have pieced and quilted it now need to decide whether to make it hot water bottle shaped and whether to add bias binding around the outside. Obviously, I am incapable of making the simplest option! 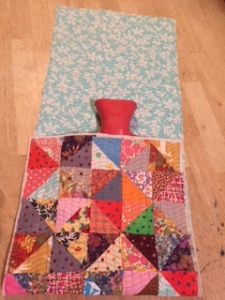 I had a great meeting over coffee at Buchanans Bistro with a small Craft Collective from  my local area. We already had a Facebook Page @CreativeCrathes as a means of advertising our small businesses but other than that we did not exactly have a purpose. In fact, we don’t really need any justification. It is quite simply nice to meet up for coffee without an agenda which can lead to sharing ideas or mentioning other contacts or organisations which could prove useful. Since then I have signed up to an online network called Craft Scotland, www.craftscotland.org added new posts to the Creative Creathes FB page and agreed to meet again in 6 weeks. And it is is nice to know that other Makers suffer the same self-doubts and pressures of time;) 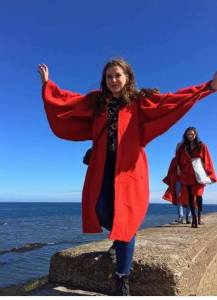 Freya’s last week at home flew by – we did the last bit of shopping, packing/unpacking, and she got bored waiting to go. I fitted in a customer quilt and 2 days of school. Nell was dreading Saturday morning and it seemed like she even tried to almost break her ankle by falling off a farm gate to delay the departure. 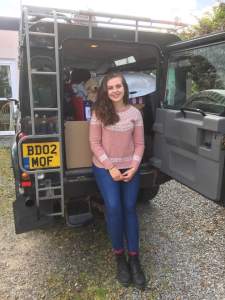 Eventually the Landy was loaded up with a trunk, suitcase, bicycle, a crochet cactus and a litre of gin. St Andrew is only about 2 hours away so we soon arrived to the chaos of many excited young people collecting keys, juggling boxes, and finding bike sheds. There were accents from all over the world all settling into their new life for the next 4 years. Freya was excited and a little nervous when we left her to finish her unpacking.

She has kept me posted with photos of the traditional Freshers’ pier walk and her new friends from England, Canada and USA. The first week for the Freshers will be a whirlwind of meet-and-greet, social events and finding their way around. I have already made a gingerbread loaf to send in the post and Nell is writing a letter with an owl on the front because we think it is all very like Hogwarts;) 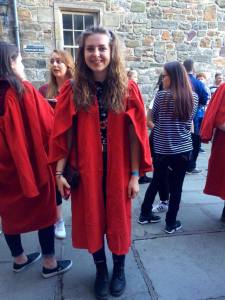 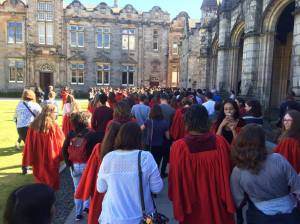 Now that major happening is all over I will have to knuckle down and order fabric for my next quilt and try to work out how on earth I am going to fit that in!