It was lovely to have Freya home during Reading Week. Not only did we enjoy her company but it was such a relief to have someone else here to supervise Nella and offer distractions at mealtimes. We did not go anywhere or do anything exciting but she got some Uni work done and enjoyed the luxury of a few home comforts. I made her a new make-up bag a a small thank you, accidentally making the base wider than I intended but she said that made the contents more accessible. 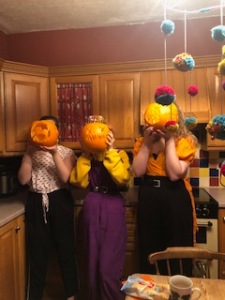 Everyone was dreading a birthday without cake, food, a party or an outing but Nella’s 16th birthday was enjoyable in the end. I surprised her with a balloon banner and Freya helped to wake her up, singing “Happy Birthday” by Altered Images. She appreciated receiving lovely cruelty-free toiletries and cosy PJs. We went for a gentle walk at Crathes Castle in the autumn sunshine then her friends came over in the evening to carve pumpkins. She said afterwards that she had had a super day but realised that it could have been so much more without the pall of Anorexia so hopefully that gives me some hope for the future.

I quilted, bound and posted 2 customer quilts and got a Christmas custom job ready to go for next week. At least I have already done an identical Christmas quilt for the same customer so I should not take long deciding what patterns to choose. 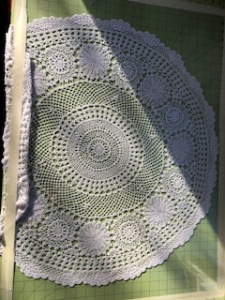 I have laid out my giant 28” doily under a large sheet of acetate to work on a bit at a time and I still have some smaller ones to draw. I now have an idea that I might print blue and white overlapping doilies onto rustic linen. I experimented with a print paste of procion dye and Manutex gel and love how it looks so much “inkier” than screenprint pigment which dries more like fabric paint. Just for fun I bought a piece of black camouflage cotton on Ebay that I may print with bright pink ink or gold foil – just because I can;)

The new-old sofa in the workshop has been a great success – I have been heading straight out to my workshop after a morning cuppa to get started on customer quilts for an hour or two then Nella can have an after breakfast snooze while I continue. That is how I got 5 customer quilts done this week, nothing custom – just utility but all very nice. Since it is officially half-term we have not felt obliged to keep up with school work but I will have to mug up on Hamlet before the new term. 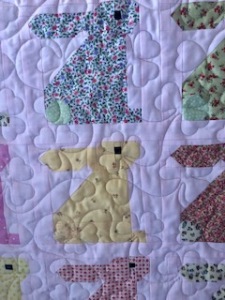 I had a go at screen-printing foil glue and applied gold transfer foil to my doilies. One was a bit splodgey but the other was quite crisp. The gold foil is rather a yellow gold and would probably look better on hot pink fabric but I bought 6 metres so I will just have to use it somehow. I have decided to go with the doily theme now that I have started. A fellow student wondered why I did not just sew doilies onto cushions instead of printing them but I never actually said I was simply going to make cushions;) I do have another, separate idea in mind as well so we will see what happens. I invested in a few blank screens and one ridiculously large one so I really need to come up with a project to use them on. 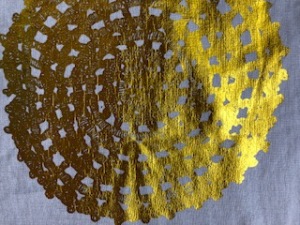 I made a couple of bolster cushions from some African wax fabric that Freya brought from Tanzania. The Youtube videos on how to attach zips to bolster cushion covers were useless but I figured it out. I foolishly decided to ignore the advice about Pi when measuring up the cushion tube but I winged it and produced 2 piped cushions that look acceptable.

I took Nella for a pre-birthday hair colour and cut. We started off with the mirror covered but she managed to relax and enjoy the experience. I enjoyed a fringe benefit and persuaded the hairdresser to cut mine so I can actually see out.

Our week was generally mundane and of a strict routine but at present that is fine. Bumble is still my best canine pal, despite having lost a lot of weight due to cancer and she sleeps most of the time. Even the vet is amazed that she is still around and since she does not appear to be in any pain I hope that will be for a while longer!

Just when I thought things were going well with re-feeding Nella, I was told that she had lost another 1.2kg by secretly exercising, panicking that she was putting on weight. I was furious and told her that if I find out that it is continuing I will pack her bag and drive her straight to hospital. She was genuinely sorry and scared so I have had to be even more vigilant, stepping up the quantity of nuts and swapping low calorie almond milk for a fortified coconut milk. I read a book called “Brave Girl Eating” where the mother battled with her daughter’s anorexia for a year, somehow getting her to consume 4000 calories per day to restore health. I have no idea how I am even going to get close to that on a strict vegan regime.

By getting up earlier I managed to fit in 4 customer quilts in bursts before breakfast and during the afternoon while Nella worked on school assignments. I showed her how to do free motion stitching and she took to it straight away so she might put some examples into her Art portfolio. 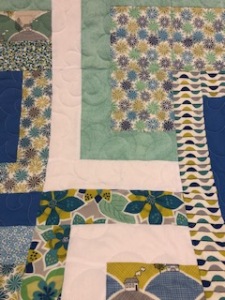 Nella is utterly exhausted most of the time and struggles to sit at the table in my workshop for long so I decided to look for a second-hand, small sofa or a “fainting couch”. I found one on Facebook and collected it in the back of the Landy with the door open, strapping it in with ropey granny-knots. It fits perfectly and looks great covered in an old quilt so hopefully I will be able to get a bit more quilting done if she is warm and comfortable.

I went to my evening class on printed textiles and developed the acetate that I had drawn of a crochet doily onto a photo-emulsion screen.  I really could not decide on a theme so I thought this could be a good starting point to get back into screen-printing. I was amazed at the detail of the print using opaque white printing ink on white cotton and rough, organic linen. It looks like this will definitely be the theme that I develop this term so I have drawn out 2 more doilies and plan to draw one that has a diameter of 28 inches. It will take ages – I have no idea what I will turn it into but I think it will work. 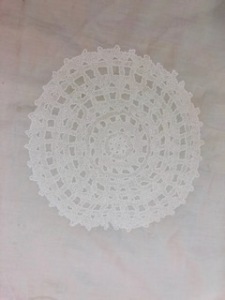 The grand tidy-up has now made its way out to the summerhouse which is now Fergus’ music studio. He is obviously incapable of organising it himself so Nella and I will supervise. The part we like the best is the IKEA pegboard with all of its neat accessories. I have put one up in the kitchen in an attempt to get clutter off my worktop. I think it is wonderful and would love to put it up everywhere there is a spare piece of wall!

It is unbelievable that we are already a week into October! I got into a new routine of getting up early and managed to complete 6 utility quilts during the week for a customer but forgot to take photos for my records. It is tricky to really get stuck into anything with all of our medical appointments and the meals regime but I gradually tackled all of the disordered downstairs cupboards, making a substantial mess before ruthlessly getting rid of cloudy glasses, chipped mugs and taking posh glasses out of boxes to be used. I rounded up DVDs from all over the house and put them all in one place which makes it look like I could own a video shop. 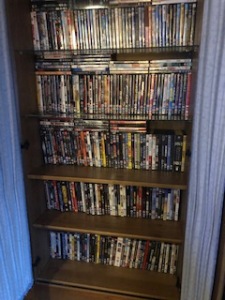 Books still need to be sorted – I don’t think I need a 1999 road atlas or any decorating manuals from the 1980s. I was especially pleased with the curtains that I made for the TV cabinet to hide boxes of cables and Nintendo games. It is satisfying to know that everything is now better organised, rather than stashed in multiple locations. Next I have to deal with a disastrous linen closet which is probably home to mutant spiders;) 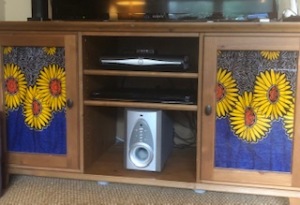 Nella has been getting anxious about how much school she is missing and we have been working on a little of each subject on most days. We had a go at making a PJ top using leftover stretch jersey. We did fairly well and produced a wearable item. It is definitely better on the seams where we used the overlocker but even after using a stretch stitch and dual feed, the stitching on the hems seemed a bit taut. I think the answer is to construct cuffs and attach them using the overlocker.

The homework for my screen-print class was to draw a design onto acetate that can be transferred onto a photo-emulsion screen.  I just could not decide on a theme so I have a temporary one which is crochet doilies. I spent ages doodling out a lace effect which is probably far too intricate but perhaps I simply need to enjoy the process of the course without necessarily requiring a finished product!